It is actually not a bad zombie apocalypse movie, as zombie apocalypse movies go. Brad saves earth, and a lot chattering, undead humans get shot and blown up. It also is a fairly straightforward public health film, which foretells horrific calamity to humans because of some possible viral outbreak that could kill much of humanity. (If you are not worried about this, then perhaps read up on the recent Ebola virus outbreak that is causing legitimate fear and even panic in West Africa.)

This narrative, of course, is nothing new. Some great cinematic predecessors include Omega Man, I Am Legend, 28 Days Later, Contagion, The 10 Commandments (assuming the angel of death that passed over the Jews in slavery might have been a killer virus), Children of Men (a personal favorite of mine), The Andromeda Strain, and much more.

Though I have no data to back up this claim, I am guessing more people around the world have learned about viruses and the threats they can pose to population and human health from such films than anything ever produced by a national or government health agency.

Can the 10th man save public health and humanity?

What I most liked about WWZ was its exploration of the concept of the 10th man, which is used by Israel’s security apparatus.

In the film, Israel had prepared for a zombie apocalypse because it had institutionalized a non-consensus decision-making safeguard. A Mossad security official character, Jurgen Warmbrunn, explains to Pitt’s hero that because of Israel’s pre-nationhood and post-nationhood catastrophes, including the Holocaust and the Yom Kippur War, one person in a decision-making group has to take the contrarian view if all nine of the others reach consensus. In Israel’s experience, failure to do so could lead to extinction. Then that person, the 10th man, must put the alternative view forward, with the larger goal of promoting the interests of the organization, country, or collective. That is why Israel in the film was ready for the zombie horde. (Click on the video snapshot below to see the clip on YouTube.)

In science, this happens all the time. Scientists and statisticians do this by attacking the null hypothesis that seeks to disprove their theory they believe to be true.

But I am more interested these days in how this may work in organizations outside of intelligence circles and defense, where mistakes can cost many lives and national security, and how organizations can incorporate 10th man decision-making. Can the contrarian view be protected and even respected in organizations that do not allow for rigorous debate about choices that have implications for the public’s well-being?

We know the popular legend of the archetypal messenger who loses his head when he brings bad news to the king. I was a newspaper reporter, and I have lived this in a mild way, having been threatened with a lawsuit by a corrupt community leader and vilified by autocratic public officials who wanted to have their malfeasance remain hidden. A new movie called Kill the Messenger, focusing on drug running by the Nicaraguan Contras during the Reagan presidency, explores this issue in-depth.

In fact, the phrase “kill the messenger” is known and understood globally, and for good reason. Many people know that organizations and human nature prevent good people from offering alternative views that challenge authority and orthodoxy. Some like Galileo, who offered a view the earth was not the center of the universe, turned human understanding of man and God on its head, and he was ex-communicated and not forgiven for more than four centuries by the Catholic Church.

So how can organizations, like public agencies such as health departments, create safe environments to allow for alternative views to flourish, for the purpose of improving decision-making internally. This is no easy fit, as these are hierarchical by design, and I have yet to hear how alternative decision-making works in them in a real-word basis.

In organizational theory, Peter Senge’s so-called “learning organizations” may be a model, but that is not really the built-in acceptance of a 10th man contrarian. Of course CEOs, companies, and consultants aplenty try to allow contrarian views because the endgame for them is profit maximization and success of the firm. In the world of intelligence gathering and organizational behavior. failure has been dubbed “group think.”

Getting back to our popular public health film trope, the zombies

Personally, I would love to see public health agencies, top to bottom, hire and fund the bright and brilliant artists who are creating manga comics and who are making manga comic-styled videos. And it is no surprise some manga comic artists have been hired and there are positive results. I have seen one video already, produced by the outfit called the Global Health Media Project. The group published a gritty portrayal of how lethal cholera can be, as a means to promote global education against its spread. You can watch the video below by clicking on the image.

What would a campaign that promoted immunizations and targeted the promoters of anti-vaccination deniers look like if it were entrusted to artists who can tell riveting stories linked to movies, like the three clips below that accompany Will Smith’s I Am Legend zombie apocalypse thriller?

Check them out and see what you think–click on each screen snapshot to see clips on YouTube. Would there need to be a 10th man pitching these ideas inside the proverbial boardroom saying this would be a better investment of prevention dollars than methods that may have yielded no measurable results, ever? 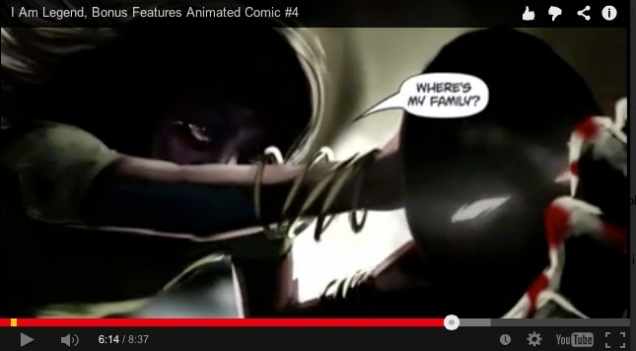