On April 7, a mob in Cairo attacked a funeral procession of Coptic Christians, a minority in the now Muslim Brotherhood-led nation of Egypt. The attackers became violent during their seige, firing guns and throwing petrol bombs according to press reports. Prior to the fall of former president and practically dictator for life, Hosni Mubarak, state police protected Christian monasteries and churches in Egypt, due to the historic persecution of the minority Christians over decades.

During the violent outburst at St. Mark’s Cathedral, two persons were killed and nearly 100 were injured. Christians inside the walled compound sustained what was called a “frenzied assault” from unknown perpetrators.

I visited in Egypt in 2004 and saw well-armed and manned police garrisons at multiple monasteries, including those in unpopulated areas, as well as at St. Mark’s Cathedral, the seat of the Coptic Christian Church. Amid the disintegration of Egyptian civil society and the ascendancy of the long-banned Muslim Brotherhood, Coptic Christians and their most sacred sanctuaries are now under direct assault. Tensions have escalated since the election of U.S.-educated and Islamist Mohamed Morsi as Egypt’s president in June 2012.

Egypt’s Coptic leaders had grown increasingly wary of worsening conditions over the last five years, particularly since the demise of U.S.-backed Hosni Mubarak. Muslim clerics, the Muslim Brotherhood, and its political wing, the Freedom and Justice Party, are credited by some media observers for inciting views hostile to the nation’s Christian minority.

In 2009, amid the swine flu scare, the Mubarak government destroyed more than 300,000 pigs, which was rebuked by the United Nations as unnecessary. Many believed the act was motivated Islam’s prohibition for eating pigs and the fact that Egypt’s pork industry is run almost entirely by Copts, many the urban poor.

One blogger wrote, “It is a national campaign to rid the country of its estimated 300,000 pigs in the name of public health.”

Copts allege the military council in the post-Mubarak era—the military still runs many Egyptian institutions and business sectors—is doing little against perpetrators of the attacks. Copts also have long complained of discrimination, including a law requiring presidential permission for churches to be built.

The Daily Star Newspaper of Lebanon reports that many Copts question their future as Egyptians. The paper notes the latest round of violence is the worse since Morsi was elected in June 2012: “Christians have been worrying about the rise of militant Islamists since the fall of President Hosni Mubarak in 2011. But after days of fighting at the cathedral and a town outside Cairo killing eight – the worst sectarian strife since Islamist President Mohammad Morsi was elected in June [2012]–many Copts now question whether they have a future in Egypt.”

Who are the Copts?

The original term “Copt” simply meant a native Egyptian with no religious connotation, only later taking on its religious meaning today.

The Coptic Church is among the oldest Christian churches, preceding Islam’s arrival in Egypt by centuries in a land that is central to Judaism and Christianity. Some of the most important places to both faiths are within Egypt’s border, including Mt. Sinai and St. Catherine’s Monastery in the Sinai Peninsula.

Among the worst attacks on Egypt’s Coptic minority in recent years was the 2010-11 New Year’s Eve bombing in Alexandria. It targeted a Coptic church and killed 21. No individual has been arrested or brought to trial for the terrorist attack in one of Egypt’s most cosmopolitan and historic cities. The deed was largely forgotten with the world’s attention focussed on the “Arab Spring.” 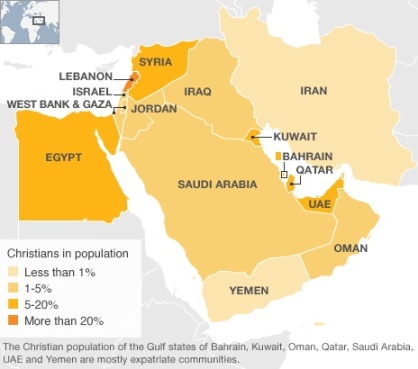 In Egypt and to a greater degree civil-war plagued Syria, the “Arab Spring” has brought intense disorder and violence to many minorities and minority faiths (Christians, Chaldeans, Kurds, Alawites, among others). Christians regionally remain fearful of a peaceful future of coexistence in the region that gave birth to contemporary Christianity.

In Egypts, Copts are now claiming life was better under dictator Mubarak, who dealt brutally with Islamists and their radical military wing, who waged a military and political campaign for decades.

According to an article published by the Middle East Quarterly, Muslim rulers historically have denied collective minority rights of non-believers. The concept of dhimmitude—itself a controversial term—explains the Islamic practice of denying equality to Jews and Christians, who historically since the Middle Ages have lived within the political realm of Muslim rulers and nations. Islam provided religious autonomy, not national freedom. To be fair, political rights for many groups, women, economic classes, and faiths everywhere in the world have not been fully realized until the last two centuries, and slowly at best and still not even today.

Memories of monasteries and my travels in Egypt

Whenever overseas events occur, it is often impossible to feel a connection to them. For me, in the case of Egypt, the collapse of Egyptian civil society has had great resonance for me. I had a chance to tour many parts of the country in 2004, observing the great poverty experienced by tens of millions of Egyptians on Mubarak’s corrupt rule. I was treated well, and I met many wonderful people, Muslim and Christians alike.

I also visited many remote monasteries throughout the country—St. Catherine’s in the Sinai (run by the Greek Orthodox), St. Anthony’s in a remote inland oasis 30 miles from the Red Sea, Bishoi and Suryani monasteries in the Wadi Natrun oasis about 80 miles northwest of Cairo, and St. George’s and St. Tawdros’s monasteries, in the desert near Luxor.

The monasteries date as far back the 4th century AD, preceding the Islamic Arab conquest of that followed in the seventh century. Today about 50 monasteries remain.

I found the Coptic monasteries to be breathtakingly beautiful and peaceful. These are continuously inhabited facilities, but also significant cultural and historic sites.

The monks who greeted me were generous and gave me tours of their facilities. At St. Tawdros’s Monastery, I required a police escort of no less than the commander of the entire military contingent protecting the Valley of Kings region, one of the most popular tourist destinations in Egypt and the scene of one of Egypt’s more violent terrorist assaults. At all of the compounds, there were armed guards in large numbers.

Those guards have now melted away. In fact, it was the Egyptian military that led a coordinated assault on the Bishoi Monastery in February 2011, shortly after the terrorist bombing in Alexandria.

The video shows nothing less than a full assault of armed men, equipped with armored personnel carriers and bulldozers, demolishing an outer protective wall that I recall seeing built during my 2004 visit. The government denied responsibility despite the glaring video evidence. Today the monastery, one of Egypt’s great historic treasures, is now at risk of increased mob and organized violence by Islamic radicals and political extremists.

I’m not sure what will happen in Egypt. It is likely Egypt’s Christians will remain a persecuted minority and some of the world’s greatest historic treasures will be desecrated by extremists and opportunists, as was seen after the U.S.-led invasion of Iraq and as the world is observing in Syria amid its civil war.